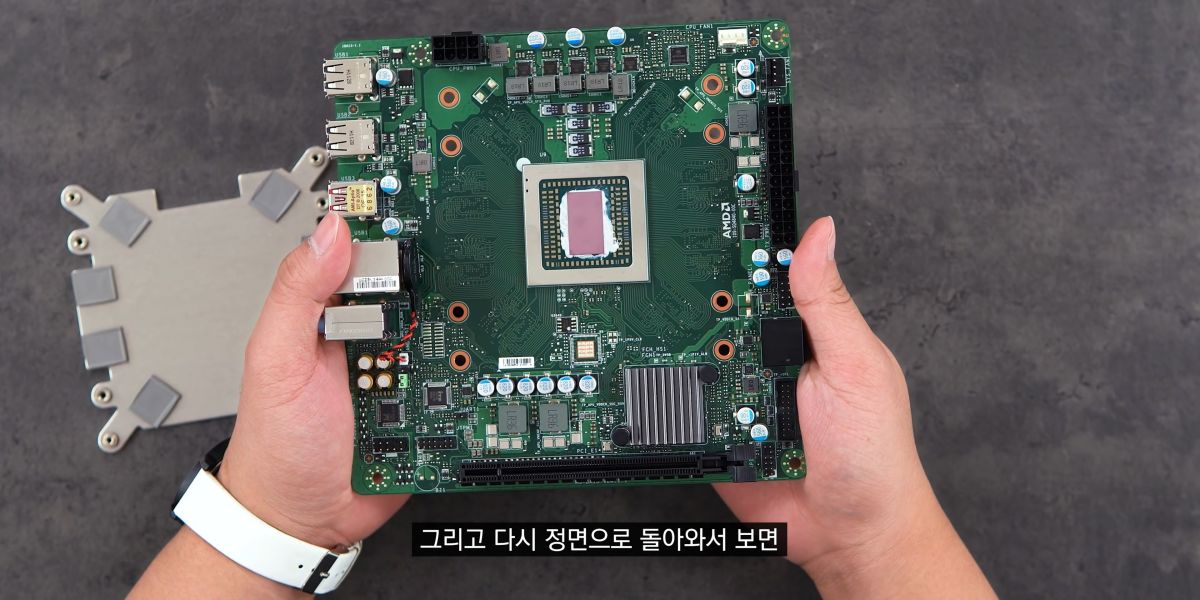 A Korean YouTuber has put AMD’s 4700S Desktop Kit through its paces. While the kit is only available to OEMs, the chipmaker has stated that we can expect up to 80 different systems to hit the market very soon. Based on what we’ve seen, it probably won’t make any best CPUs list, if only because it’s only available as a complete kit.

Initially, the AMD 4700S was speculated to be recycled Xbox Series X APUs. However, the latest photographs of the chip showed a shocking resemblance to the APU (codename Ariel) inside the PlayStation 5. The AMD 4700S is soldered to a motherboard the utilizes the A77E fusion controller hub (codename Bolton-E4). The A77E hub was paired with AMD’s A9-9820, the chip that powered the Xbox One S. That small detail lead us to believe that the AMD 4700S was somewhat related to the Xbox Series X’s APU (codename Arden). However, the AMD 4700S is probably defective dies that didn’t make their way into the PlayStation 5.

Wielding eight Zen 2 execution cores with 16 threads, the AMD 4700S arrives with 8MB of L3 cache and 4MB of L2 cache. The octa-core chip comes with a 3.6 GHz base clock speed, but lacks an integrated graphics engine. The AMD 4700S can come equipped with 8GB or 16GB of soldered GDDR6 memory.

The YouTuber didn’t perform many application tests on the AMD 4700S, unfortunately. It would be interesting to see how the memory bandwidth and latency affect other areas. In the Cinebench R20 comparison, for example, the Ryzen 7 3800XT outperformed the AMD 4700S by a 36% margin.

Although both processors sport eight Zen 2 CPU cores with simultaneous multithreading (SMT), the Ryzen 7 3800XT does flaunt a higher base clock (3.9 GHz vs. 3.6 GHz), and a higher boost clock and more L3 cache (32MB vs 8MB). The Atlhough we don’t know the TDP (thermal design power) for the AMD 4700S, it should be lower than the Ryzen 7 3800XT’s 105W rating, considering the AMD 4700S’s modest factory cooler.

Without an iGPU, the AMD 4700S has to rely on a discrete graphics cards like any other Ryzen desktop processor. Sadly, the AMD 4700S resides on a motherboard where a PCIe 2.0 x16 expansion slot, which is wired x4 electrically, is the only option for expansion.

The Ryzen 7 3800XT offered 36% and 59% higher average frame rates in Overwatch and Horizon Zero Dawn, respectively. Surprisingly, the AMD 4700S managed to beat the Ryzebn 7 3800XT in PlayerUnknown’s Battlegrounds by a small margin of 3%.

Although he didn’t provide any results for the Ryzen 7 Pro 4750G, the YouTuber noted in a comment that the AMD 4700S’s performance was slightly inferior to the Zen 2 APU. The biggest disappointment with the AMD 4700S is the disabled or lack of integrated graphics, forcing consumers to invest in a graphics card. Due to the PCIe 2.0 x16 @ x4 restriction, it doesn’t make much sense to pair the AMD 4700S with a high-end graphics card, which rules out most of the best graphics cards.

It’s a shame that the AMD 4700S Desktop Kit is only available via pre-built systems. You end up paying for hardware that you might not necessarily need, such as the SSD, graphics card, power supply and case. The AMD 4700S has the potential to be the foundation for a nice mini-ITX system even if it’s not for gaming.