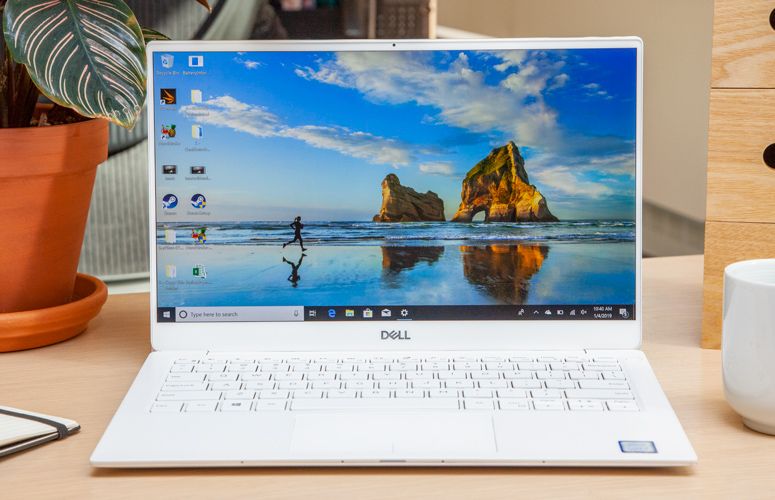 Dell just made one of the best laptops even better. Loaded up with Intel’s powerful 8th-Gen core processor, the XPS 13 (starting at $899, reviewed at $2,449) is even faster and more powerful than ever. Plus, Dell finally got rid of the nosecam.

However, the combination of a 4K display and a power-hungry CPU puts the battery life at just under 8 hours, which can be a detriment to mobile professionals. If you need more endurance, we recommend the 1080p model, which endured for more than 12 hours on our battery test (a runtime that makes it one of the best college laptops). And if you want a convertible laptop, consider the upcoming XPS 13 2-in-1, which is the best 2-in-1 laptop around. Regarding design and performance, the XPS 13 remains among the best in its class. It’s also one of the laptops with best battery life.

If you’re looking for a 2-in-1 laptop, the new Dell XPS 13 2-in-1 (coming in July) offers a 10th Gen Intel Core processor and a bigger keyboard than its predecessor in an even thinner design.

Rose Gold? That’s so last year. 2019 is officially the year of Frost Silver and Arctic White. Dell decided to shake things up with a new color scheme that’s just as alluring as the previous model, if not more so. The anodized aluminum has a light gray finish that stops just short of pearlescence, looking as radiant as morning frost just before it gives way to the rising sun. The Dell logo sits triumphant in the center of the lid as the lone adornment.

A peek along the sides of the system reveals the Arctic White finish that awaits inside the laptop. The interior deck retains the glass-fiber weave from previous models that’s simultaneously pretty and strong. The pristine white continues toward the display, outlining the scant borders of the InfinityEdge bezel. Follow the bezels and you’ll discover that the webcam has migrated from the bottom bezel back to its rightful place at the center-top (more on that later).

If Frost just isn’t your thing, the latest version of the XPS 13 is also available in Rose Gold.

At 11.9 x 7.8 x 0.3~0.5-inches, the 2.7-pound laptop is one slim mamma-jamma. At 0.6-inches thick, the Apple MacBook Pro 13-inch (with Touchbar), Razer Blade Stealth and Microsoft Surface Laptop 2 look chunky by comparison. The MacBook Pro (3 pounds) and Stealth (2.9 pounds) are definitely heavier, while the Surface Laptop 2 is just a tad lighter at 2.7 pounds.

Smallest. Webcam. EVAR. No, seriously, this is Dell’s smallest webcam. In response to the XPS 13’s webcam being derisively dubbed the “nosecam” due to its position in the bottom bezel, Dell made its own webcam and moved it back where it belongs in the top bezel.

The new cam is only 0.08-inches, but still manages to take a good picture.

The XPS 13 doesn’t have a lot of ports, but you can do a lot with them.

The pair of Thunderbolt 3 ports on the left and the UBC Type-C port on the right are all capable of charging the notebook and can act as mini DisplayPorts if you want to connect the system to a larger monitor.

That leaves a microSD card on the right for expanding the memory, and the headset jack and wedge lock slot on the left for listening to music and securing your laptop.

Man, oh man, dem bezels! Make that lack thereof. Dell continues to lead the charge on having the slimmest bezels possible, thanks to its InfinityEdge design. The top bezel is just a wee bit thicker than normal to accommodate the webcam, but not so much that you’d really notice.

But youll forget the thicker bezel once you scope out the screen. It produced sumptuous color when I watched the 4K featurette of Samsara. I was particularly impressed with the deep blacks, rich golds and vibrant reds during the Balinese dancers’ routine. The details are also wonderfully crisp, allowing me to see the deep fissures in the time-worn stone statues.

The dramatic pops of color come from the screen’s ability to reproduce 119% of the sRGB gamut, which matches the MacBook Pro and beats the 117% premium laptop average. However, the XPS 13’s optional FHD (1080p) display is even more vivid at 126% as was the Stealth at 120% while the Surface Laptop 2 hit an incredible 176%.

The XPS 13’s side-firing speakers were a pleasant surprise. The laptop managed to fill my medium-size hotel room with loud, if sometimes crowded, audio. Listening to Janelle Monae’s “Can’t Live Without Your Love,” the room was filled with the chanteuse’s longing vocal. It overpowered the rest of the track even after fiddling with the Waves Maxx Audio software. But listening to “Can You Stand the Rain” by New Edition provided a cleaner result as did Guns N’ Roses’ “November Rain.”

The XPS 13’s keyboard cuts a striking figure in white, especially when the backlighting is enabled. But what’s more impressive is the typing experience. Despite having only 1 millimeter of key travel (we generally look for at least 1.5mm), I never felt like I was bottoming out when I was typing. And thanks to the 63 grams of actuation force (60g is our accepted minimum), the otherwise shallow keys had a nice little pop.

Still, I was just short of my usual 70 words per minute on the 10fastfinger typing test, reaching only 65 wpm.

The 4.1 x 2.3-inch precision touchpad is both quick and accurate, keeping pace with my web page navigation as well as my pinch-zoom, two-finger scrolling and three-finger swipes.

The XPS 13 just got a shot of Whiskey with a performance chaser. Armed with one of Intel’s new Whiskey Lake chips, specifically the Core i7-8565U CPU with 16GB of RAM, the laptop let me stream Black Mirror: Bandersnatch from Netflix while also opening 25 additional Google Chrome tabs running either a Twitch stream, Tweetdeck or YouTube. The XPS 13 was effortless in execution, performing without any hint of lag. But don’t expect that same level of performance on the base model we reviewed, which comes with a Core i3-8145U CPU and 4GB of RAM.

When we ran the Excel Spreadsheet Macro test, the XPS 13 took 1 minute and 10 seconds to pair 65,000 names and addresses, sliding past the 1:31 category average. The Surface Laptop 2 and MacBook Pro weren’t far behind at 1:15 and 1:16, respectively. But the Stealth blew the competition away, completing the task in 21 seconds.

It took the 4K XPS 13’s 1TB PCIe SSD 9 seconds to copy 4.97GB of multimedia files. That translates to a transfer rate of 565 megabytes per second, which was more than enough to beat the 529.7-MBps average. Unfortunately, we can’t say the same about the base model XPS 13, whose 128GB SSD transfered the files at a sluggish rate of 154 MBps. Neither the Stealth nor the Surface Laptop 2 with their 512GB PCIe M.2 NVMe SSDs could touch the 4K XPS 13, at 254 and 203 MBps. But the MacBook and its 256GB SSD was out of the competition’s league at 2,519 MBps.

As powerful as Whiskey Lake is, don’t expect to play any graphically taxing games like Battlefield V or Destiny 2 with the XPS 13’s Intel UHD 620 Graphics GPU. It can, however, play older or less demanding games. The notebook with a Core i7 notched 88 frames per second on the Dirt 3 benchmark, which ran at 1920 x 1080p. That score beat out the 73-fps average as well as the MacBook Pro (Intel Iris Plus 655) and the Surface Laptop 2 (Intel UHD 620 Graphics GPU), which achieved 47 and 82 fps. But the Stealth with its discrete Nvidia GeForce MX 150 GPU posted 164 fps. The Core i3 model of the XPS 13 only topped the MacBook Pro, at 55 fps.

If you want the most endurance, we would opt for a full-HD screen on the XPS 13 and skip the 4K panel.

Our 1080p model endured for 12 hours and 22 minutes while the 4K review unit lasted just 7 hours and 50 minutes on the Laptop Mag Battery Test (continuous web surfing over Wi-Fi at 150 nits). The UHD model fell below the 8:30 premium laptop average. The Stealth did a little better with a time of 8:05, while the MacBook Pro and Surface Laptop 2 clocked in with times of 8:43 and 9:22, respectively.

Typically, a laptop as slim as the XPS has trouble staying cool. To combat this, Dell doubled up on heat pipes and fans to increase air intake and output. The company also added GORE Thermal Insulation, the same material that’s used in the Mars Rover. The silica aerogels work to dissipate heat throughout the system, keeping things nice and comfy.

The laptop lived up to the hype for the most part. After running a full-screen HD video for 15 minutes, we measured the laptop’s touchpad, center of the keyboard and undercarriage. The XPS 13 measured 87, 96 and 95 degrees Fahrenheit in the three respective zones. We consider anything over 95 degrees to be outside of our preferred comfort threshold. However, I used the XPS 13 in my laptop for over an hour without any feelings of discomfort.

Dell preloaded a number of useful apps and utilities to help optimize the user experience. For instance, there’s Dell Power Manager, which allows you to manage power consumption via preset profiles to extend battery life or to squeeze every bit of performance out of the system.

Customer Connect puts you in contact with a Dell technician when you need troubleshooting assistance. Digital Delivery keeps track of all your software downloads and restores them in case of a system wipe or crash. There’s also Mobile Connect, which allows you to swap images, documents and videos seamlessly between your smartphone and laptop. You can also access mobile apps via your laptop, including Lyft, Uber and Instagram.

In order to manage your network bandwidth, there’s Killer Control Center. And if you’re short on storage, you can get 20GB of cloud storage free for a year via Dropbox. Unfortunately, Microsoft has saddled this slim laptop with a load of bloatware, including Netflix, Candy Crush Soda Saga, Cooking Fever and Asphalt Street Storm, just to name a few.

The Dell XPS 13 ships with a one-year limited warranty. See how Dell fared in our annual special reports, including our Tech Support Showdown and Best and Worst Brands.

The Dell XPS 13 was already a great laptop and Dell has made some welcome improvements to remain our favorite ultraportable overall. The addition of Intel Whiskey Lake cements the XPS 13’s status as a mobile powerhouse. And when you’re not crunching the numbers, that vivacious 4K display is perfect for watching video. We especially like the itty-bitty webcam, killing the nosecam forever.

While the battery life on the 4K display model could be better, the Dell XPS 13 continues to be a top pick.

Steam Deck may have trouble playing Destiny 2, Apex Legends and PUBG — Here’s why