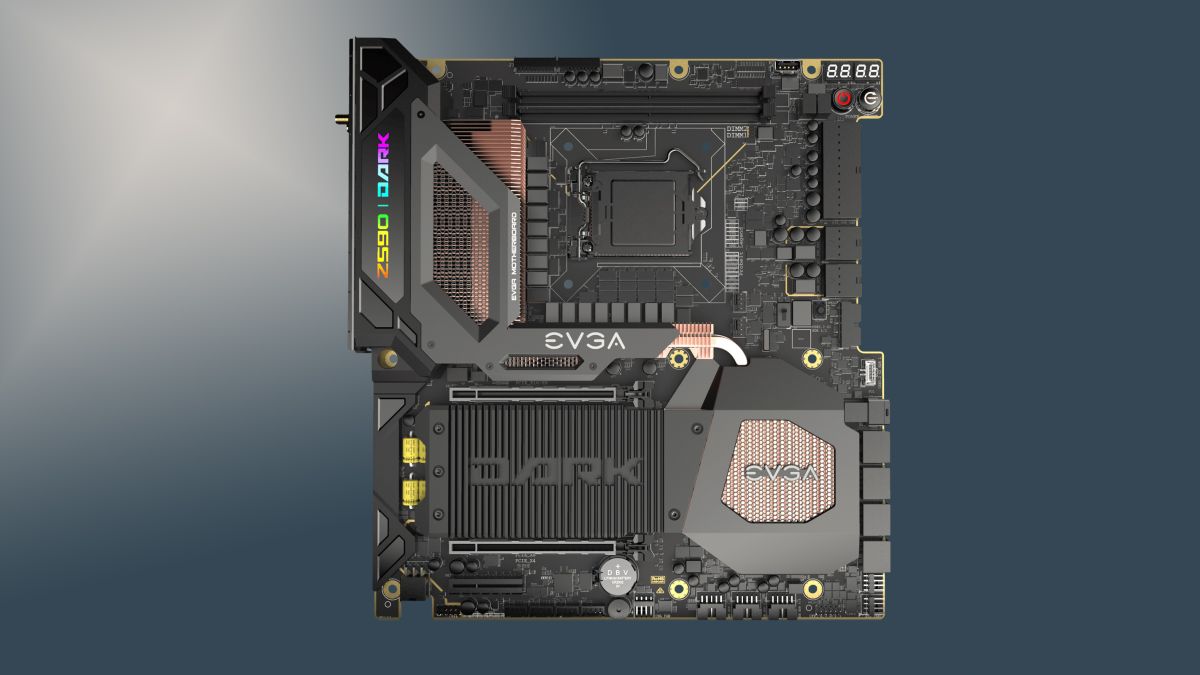 After what seems to be an eternity, EVGA has finally released a product page for its flagship Z590 Dark motherboard, which has been on hiatus since its initial announcement back in January. Hopefully, this means we’ll see EVGA’s new flagship on sale sooner than later, and we can consider it for our list of the best motherboards.

This product page is the first sign of the motherboard in seven months.

Once the Z590 Dark goes on sale, it will be one of the most monstrous boards you can buy for overclocking Intel’s Rocket Lake platform. It is packed with a beefy 21 phase power design, large copper heat pipes, and dual DIMM slots for maximum overclocking efficiency.

The cooling EVGA has implemented for the VRM and power delivery systems is one of the beefiest we’ve seen on a motherboard, with copper heat pipes and copper fin stacks covering almost the entire rear and middle of the board. To back that up, the board comes with dual PWM fans near the rear I/O that will push air directly over these copper fin stacks for even more cooling potential.

The board is also equipped with hard touch buttons for your power and rest functionality, and dual multi-function POST indicators for detailed troubleshooting when your PC fails to start, something that comes in handy when overclocking.

EVGA didn’t skimp on the board’s storage solutions with up to three M.2 slots, one being Gen 4.0 compatible. All three slots are housed underneath a large heatsink for additional cooling.

The Z590 Dark’s layout is also quite different from your typical ATX/E-ATX motherboard, with several of the components relocated and re-oriented in a different position than you may expect. The 24 pin connection has been re-oriented into a right-angle connector, and the 8-pin EPS power connectors were relocated right next to the 24-pin power input and feature the same right-angled connector. Plus, this area of the board has been recessed in, giving the Dark better compatibility with ATX chassis and their grommet holes for better cable management.

The CPU and memory area has also been changed, with the CPU rotated 90 degrees and the memory sitting on the top of the board instead of the right. This should allow for better memory cooling from the top exhaust or intake fans if your case allows it.

EVGA has not explained why it’s taken so long to release official specs for the Z590 and why it’s taking so long to become available. But we can presume that the pandemic along with the current technology shortage is the culprit for the delay.

Unfortunately, we still don’t have an availability date for the Z590 Dark, but with the release of an official product page, we should see availability from major retailers such as Newegg and Amazon rather soon.