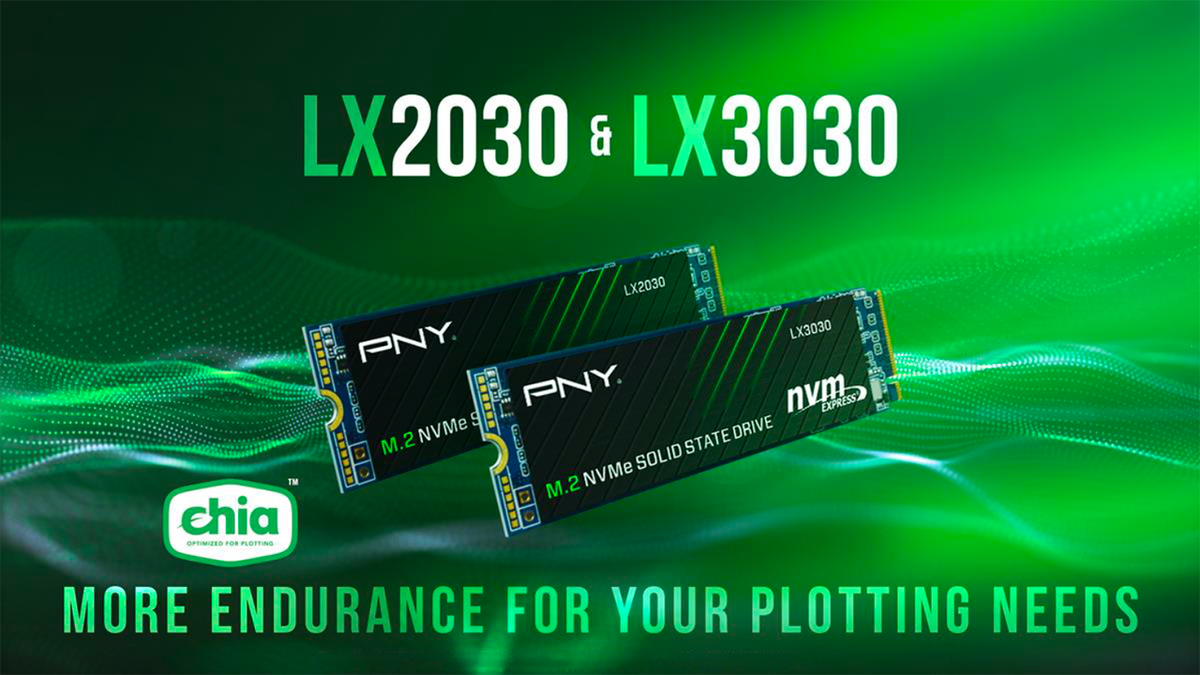 PNY unveiled its new LX family of SSDs that are designed specifically for write-intensive workloads, such as Chia plotting and mining. The company’s LX-series drives deliver rather unprecedented endurance ratings of up to 54,000 terabytes written (TBW), courtesy to Phison’s proprietary LifeXtension technology.

PNY’s LX family includes three models that come in an M.2 2280 form-factor: the entry-level LX2030 2TB, the midrange LX3030 1TB, and the flagship LX3030 2TB. The drives feature a PCIe 3.0 x4 interface and are rated for up to 3200 MB/s sequential read speeds and 2400 MB/s (LX3030) or 1000 MB/s (LX2030) sequential write speed. These aren’t performance champions here, but the drives are tailored specifically for maximum endurance in plotting scenarios.

“I am very excited that PNY has partnered with Phison to deliver the first SSD for Chia plotting,” said Jonmichael Hands, VP Storage Business Development at Chia. “The LX3030 is tuned for the Chia plotting workload, which requires a high amount of sustained bandwidth. Users can be at ease knowing they won’t wear out the drive easily — the LX3030 1TB can create 2PB of plots before wearing out!”

The PNY LX SSDs are based on a Phison controller enhanced with the LifeXtension technology (designed specifically for Chia plotting), and presumably come coupled with 3D TLC NAND memory. Neither PNY nor Phison disclose how exactly LifeXtension works, but it looks like we are dealing with a compression technology designed specifically for Chia plots that contain hashes. They also indicate that it supports two XPlot modes: XPlot plain designed to increase endurance by about 3x and XPlot Pro that promises to boost endurance by up to 18x.

It is unclear whether Phison’s LifeXtension can be used for other write-intensive workloads to improve endurance of PNY’s LX-series SSDs, but the company specifically stresses that these drives are designed for Chia plotting.

Back in early May TeamGroup released its T-Create Expert PCIe SSDs, also tailored for Chia plotting and featuring high endurance ratings, but it looks like that drive has a lot of redundant 3D NAND memory for overprovisioning and does not use any technologies akin to Phison’s LifeXtension.

PNY said that the LX-series SSDs are available immediately, but it did not disclose their recommended pricing. While the ability to create nearly 500,000 k32 Chia plots sounds impressive, storing those plots will be a costly endeavor. With Chia farming profitability currently sitting at around $2 per month for 1TB of storage, even with pooling, the long-term prospects aren’t looking particularly promising.