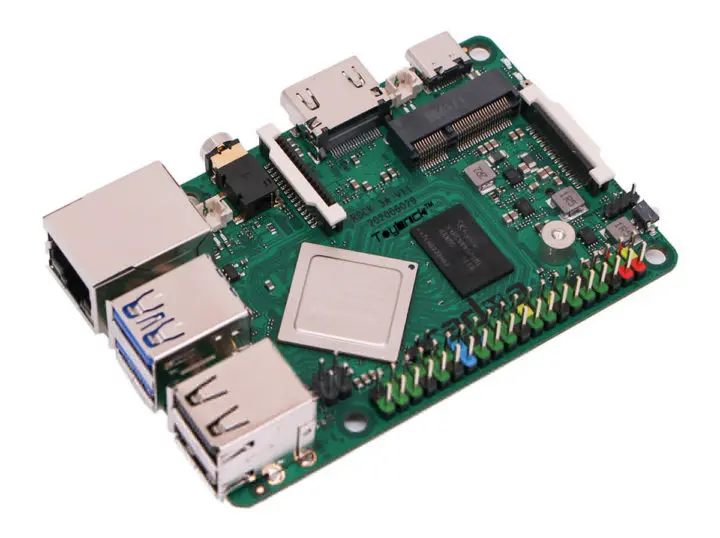 The Raspberry Pi form factor is a popular one, compact enough to fit in some interesting places yet packed with power and IO. What the form factor lacks is fast and cheap storage possibilities. Step forward the Radxa Rock 3A, as spotted by CNX Software, which offers the familiar form factor and two M.2 slots for Wi-Fi and SSDs.

Closely following the Raspberry Pi 3B layout, the Rock 3A is powered by a Rockchip RK3568 SoC that manages to squeeze in a 2GHz quad core Arm Cortex A55 CPU, 2,4 or 8GB of LPDDR4 RAM. But the most interesting features of this board are the two M.2 slots, one for an NVMe SSD (albeit with only two PCIe 3.0 lanes) and the other with one PCIe 2.0 lane for one of the short ‘module’ cards, such as a Wi-Fi 6 adapter. The faster M.2 socket is situated underneath the board, but doesn’t feature a retention screw, so either the M.2 slot is connected via an adaptor board or we will need to hack our own solution.

There’s another bit of IO weirdness on the board, in the form of SATA support via the pair of USB 3.1 ports. The Rockchip RK3568 SOC at the heart of it all contains, along with its four Cortex A55 cores and up to 8GB of RAM, some multiplexed SerDes (serialiser / deserialiser) lanes that can be configured as USB or SATA in software. This technically breaks the USB spec, which says that other protocols can’t be passed over any USB port other than Type-C. The board comes with a SATA breakout cable, and presumably a power safeguard so that SATA peripherals aren’t introduced to USB 3.1’s full power output unexpectedly.

Elsewhere on the board, you’ll find a space for an eMMC module, Micro SD card slot, an HDMI 2.0 port, 3.5mm audio jack, CSI camera connector, Gigabit Ethernet, two USB 2 ports and a GPIO header that’s ‘mostly’ compatible with those on the Pi 3. We wonder how much work those inverted commas are doing. Power comes via USB-C, and the whole board is just 3.3in x 2.1in (85mm x 54mm) in size.

Debian 10 support is being touted, along with Manjaro Linux and Slackware. The board is so new that it’s not even available to buy yet, with only a few early samples in the wild. That should all change by the end of August, however when units are expected to be available with prices at $35 for 2GB, $55 for 4GB and $75 for 8GB matching that of the Raspberry Pi 4.

Nuclear-Powered Crypto Plant Planned for PA Next Year. What Could Go Wrong?

How to Hack an SNES Classic Console to Add More Games