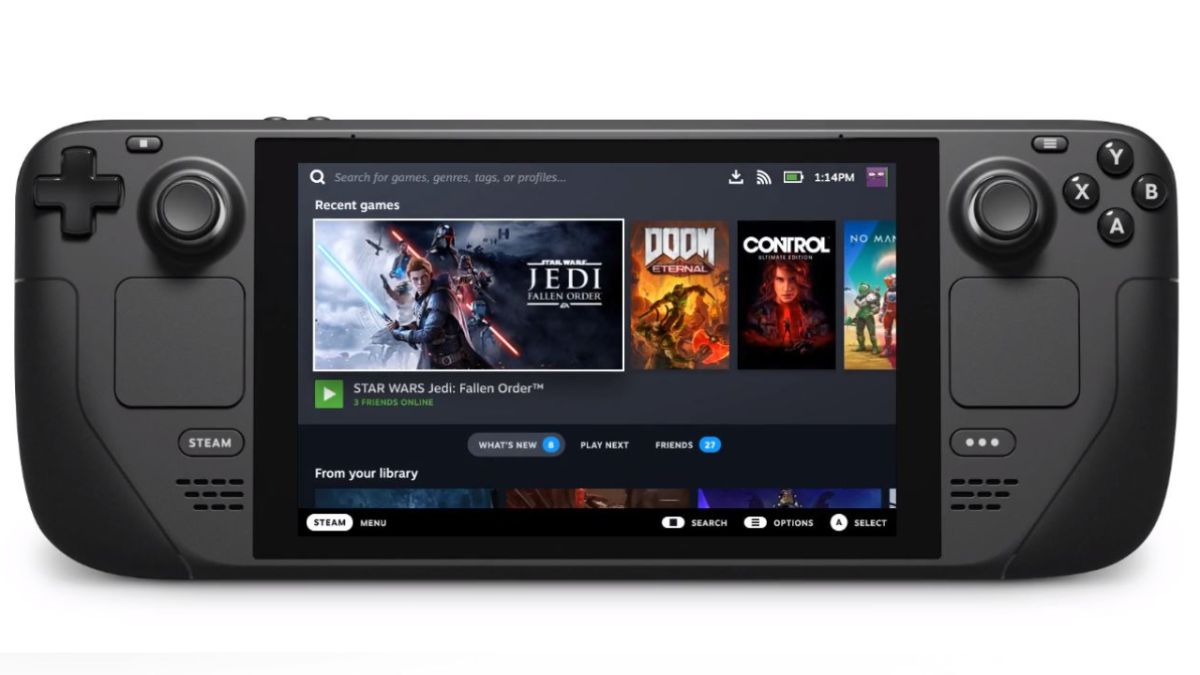 The Steam Deck is Valve’s long-rumored portable PC, and its set to launch this December. This Nintendo Switch-like device promises to put a fully-functional PC in the palm of your hand, and for anyone with a large Steam library of games, it already sounds like quite a tempting proposition.

News originally surfaced that the company behind Half-Life was secretly developing a dedicated handheld device back in April. Dubbed the “SteamPal”, which was also previously known by the codename Neptune, Ars Technica were the first to break the news about Valve’s portable PC gaming device which we now know is real.

At a glance, the Steam Deck is an all-in-one portable PC gaming device that brings the features and games you love from Steam and packs it into a new powerful and convenient form factor that you can take with you wherever you go. It runs a modified version of Valve’s SteamOS, complete with a console-like interface, and has 7-inch LCD screen.

Much like the Nintendo Switch, the Steam Deck can also be docked and output to a TV or monitor using its USB Type-C port. Valve plans to sell its own dock separately at a later date, but you can use existing USB Type-C docks without worry.

This functionality means you can use the Steam Deck as a fully-fledged PC if you so choose, as you can also install any OS you like – though most will be happy to stick with SteamOS. You can also connect various hardware accessories like a mouse and keyboard or flight stick, which means all your favorite peripherals will work. Oh, and you can even connect a pair of wireless Bluetooth headphones.

Steam Deck: Cut to the chase

The Steam Deck is set to release in December 2021, and costs $399 / £349 for the base model that comes with 64GB of eMMC internal storage and a carrying case.

The mid-range option costs $529 / £459 and includes a 256GB NVMe SSD inside for faster storage, a carrying case and an exclusive Steam Community profile bundle.

All three consoles storage can be expanded thanks to a microSD card slot, which supports SD, SDXC and SDHC formats.

Valve’s Gabe Newell said the company found hitting Steam Deck price “painful” but “critical” in an interview with IGN. Newell told IGN about the need to be “very aggressive” in terms of pricing, and said that the top priority was to make sure that PC players are able to pick up the Steam Deck and feel like it works perfectly.

“I want to pick this up and say, oh, it all works. It’s all fast. It’s all… and then price point was secondary and painful. But that was pretty clearly a critical aspect to it,” Newell said. “But the first thing was the performance and the experience, [that] was the biggest and most fundamental constraint that was driving this.”

The Steam Deck may look rather ungainly, but Valve says it’s been designed for comfortable, extended play sessions, and it has full-fidelity control so you can play your favorite games without any compromises.

The Steam Deck features “best-in-class” thumbsticks with capacitive touch sensors built-in, which Valve says will provide “a level of precision and comfort not found on other portable gaming devices”. Unlike the Switch, the controllers can not be removed from the display like the Joy-Con. It means the Steam Deck is more akin to the Nintendo Switch Lite in this regard.

You’ll notice that the Steam Deck also includes two trackpads, which means users will have mouse-like control in games that don’t play nice with a gamepad. Valve says these pads are similar to those found on its now discontinued Steam Controller, so expect some haptic feedback and general improvements over the trackpads of old.

Along with the usual triggers on the back of the device, which are pleasing analog unlike the Nintendo Switch’s digital triggers, the Steam Deck also includes Grip buttons, which will provide extra input options right at your fingertips. If you’ve ever used a “Pro” controller, you’ll understand how useful these extra buttons can be.

Valve’s portable device features a 7-inch LCD touchscreen, and even includes gyro controls, so you can fine-tune your aim by physically positioning the device and achieve more precision than using a thumbstick or trackpad alone.

The Steam Deck also lets you suspend and resume games by pressing the power button to put the device into sleep mode, just like the Nintendo Switch. You can only suspend one game at a time, however, so don’t expect something like Xbox Series X‘s Quick Resume feature that lets you suspend multiple games at a time.

In terms of other features, the Steam Deck has expandable storage thanks to a microSD card slot, includes two stereo speakers, onboard dual microphones, and the battery life is predicted to last between two to eight hours, depending on the games you are playing.

As the Steam Deck is basically a PC with a gamepad attached, you can choose to install PC software, browse the web, watch streaming video and even complete productivity tasks. You can even install games from other stores, if you like.

Of course, the Steam Deck comes with all the Steam features you’d expect. It supports Steam Chat, Remote Play, notifications, the entire Steam Store experience, Cloud Saves and access to the Steam Community. It runs a new Steam operating system that is optimized for a handheld gaming experience, too, so it should feel intuitive to use.

What’s inside the Steam Deck? Valve’s portable PC promises to run the latest AAA games, and run them really well. Here’s a full breakdown of the Steam Deck’s internal specs:

As the Steam Deck is powered by a custom APU using AMD Zen 2 and RDNA 2 architectures, it means that while the Steam Deck should be able to comfortably play most games, you’ll probably be limited to medium settings at its native 1280×800 resolution in the most demanding of titles.

We’ve seen footage of the Steam Deck from playing indie classics like Stardew Valley to graphical intensity games like Star Wars: A Fallen Order and Death Stranding, the latter of which wouldn’t be possible on the Switch without some serious cutbacks.

The Steam Deck is significantly more powerful than the Nintendo Switch, which means it’s a bit bigger as a result. We also expect the fan to be slightly more audible than on the Switch, which is usually whisper quiet.

Should Nintendo be worried?

The Steam Deck isn’t the first portable PC we’ve seen enter the hardware space – the likes of Onexplayer have shown that it can be done. However, Valve’s handheld promises to deliver a more refined and optimized experience than previous attempts from other manufacturers.

It’s this focus that makes the Steam Deck a genuine competitor to the Nintendo Switch, Switch Lite and recently announced Nintendo Switch OLED. With a price differential of $50, consumers will now have a big decision to make when it comes to which portable console they want to buy this Christmas, as the Steam Deck has some big plus points over Nintendo’s system.

First of all, having access to Steam and your existing library of games means that PC owners who pick up a Steam Deck could potentially have hundreds of games to play from day one. The Steam Deck is also far more capable in terms of hardware than the Switch, which means you can run AAA games, and achieve higher framerates and consistently hit the 720p resolution target.

The Steam Store is also a far more appealing proposition than the Nintendo Switch eShop. While Switch games have a tendency to be overpriced, Steam is notorious for its enticing discounts and deals, so even if the console itself costs more on day one, there’s a good chance you’ll save in the long run.

Much like the Nintendo Switch and Switch OLED, the Steam Deck can also be docked, allowing you to output the display to a TV or monitor. However, it’s far more flexible than the Switch, as it’s for all intents and purposes a portable PC. That means you can attach any peripheral you like, install a new OS and browse the web. You could even use the Steam Deck to complete productivity tasks.

There’s some added value, then, and while you lose the ability to start a spontaneous multiplayer session like you can on the Switch, the Steam Deck seems like a device that will instantly appeal to Switch owners who have been craving a Nintendo Switch Pro.

It’s worth noting that the Nintendo Switch OLED will come with a more vibrant display than the Steam Deck’s 7-inch LCD screen, but until we see the Steam Deck in person, it’s hard to say just how nice Valve’s chosen display performs.

How does the Steam Deck stack up to Nintendo’s trio of Switch models when it comes to price? Remember that all Steam Deck purchases come with a free case, and the high end 512GB model includes premium anti-glare etched glass. Both the Steam Deck and Nintendo Switch come with expandable storage via a microSD slot.

Valve’s Steam Deck looks like it will provide stern competition for Nintendo’s Switch, then, and could be a viable alternative for those looking to pickup a hybrid device that can also function as a desktop gaming PC, albeit at the cost of graphical performance.

We’ll be keeping our ear to the ground for any more Steam Deck news and announcements, and will update this page accordingly should we hear more.