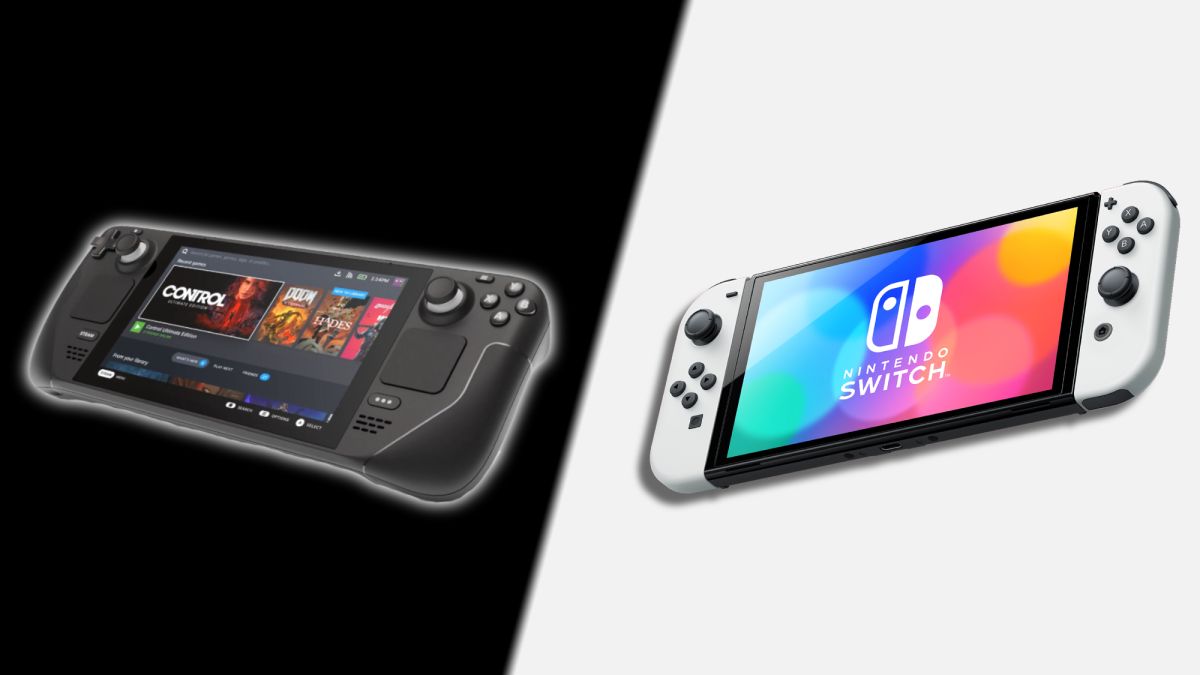 We bet Nintendo didn’t think it would have competition for the Switch OLED so soon, but that’s exactly what Valve’s new portable PC, the Steam Deck, is set to provide.

The Steam Deck could be considered to be the Nintendo Switch Pro that many had expected the Kyoto-based company to make, as it’s equipped with powerful specs, and is capable of running the latest AAA games like Death Stranding and Doom Eternal. It’s also a portable PC, and that means it’s capable of so much more than a handheld-only device. Hook it up to a docking station and you can output to a monitor, attach Bluetooth and USB accessories, and even use it for productivity tasks.

It’s a different proposition to the Nintendo Switch OLED in many ways, then. But one thing that they both have in common is the ability to play games on the move. If Valve’s new handheld console has caught your eye, we’re putting head-to-head against the Switch OLED to see which one comes out on top.

Valve’s Steam Deck is set to cost $399 / £349 for its entry-level 64GB model, which is the closest match to the Nintendo Switch OLED. It’s due to launch in December 2021, with pre-orders now available. There’s a small deposit to pay of $4 / £5 if you’d like to reserve your Steam Deck, and you can do so by heading to the Steam Store.

The Nintendo Switch OLED will retail for $349 / £309 / AU$539 and will be released on October 8, 2021. The Switch OLED is $50 cheaper, then, and both consoles can have their storage expanded via the included microSD card slot found on both systems. The Switch OLED is also available to pre-order now.

While both the Steam Deck and Nintendo Switch OLED are portable consoles, they do differ significantly when it comes to technical specifications and design. Both consoles come equipped with a 7-inch touchscreen (the Steam Deck has a resolution of 1280×800 and the Switch OLED is 1280×720), though the Nintendo Switch OLED boasts an OLED display. This means it should offer more vibrant colors, inky black and better contrast ratio than Valve’s LCD screen on the Steam Deck. Both screens’ max refresh rate is 60Hz.

In terms of controls, the Steam Deck features two analog sticks and two touchpads that can replicate mouse movement. They have capacitive touch sensors built-in, which will detect when your thumbs are active. You’ll also find the usual face buttons, bumper and trigger buttons, as well as gyroscope control included. It’s worth noting that the triggers on the Steam Deck are analog, not digital like on the Switch OLED, which means they can provide more fine-grain control. The Steam Deck adds further inputs via the four grip buttons on the back of the device, which provide extra inputs when playing games.

The Nintendo Switch OLED comes with the Joy-Con controllers that we’ve been used to since 2017. The Joy-Con controllers feature HD Rumble, motion controls and can be detached from the console, enabling local multiplayer at a moment’s notice if you’re playing in tabletop mode. Thanks to the Switch OLED’s redesigned, wider stand, this should be far more appealing and easier to do. The Steam Deck’s controllers cannot be detached, and it doesn’t come with a kickstand, either.

However, both the Steam Deck and Nintendo Switch OLED can be docked to output to a TV – although Valve hasn’t revealed it’s official dock, which will be sold separately. Unlike the Switch OLED, though, the Steam Deck can be output to a TV or monitor via its USB Type-C port and a USB Type-C dock. This gives the handheld much more flexibility, and it can also output at higher resolutions than 1080p.

Valve’s machine is certainly impressive, then, and should allow the system to run most AAA games at medium to high settings at 720p/60fps. That’s a far cry from the Nintendo Switch, which has historically struggled to get third-party titles running above 30fps, and resolution usually has to be sacrificed as a result. That doesn’t mean the Switch OLED isn’t still a great piece of hardware, though, particularly as you won’t find games like Breath of the Wild 2 and Mario Kart 8 Deluxe anywhere else. Here’s what’s inside the Nintendo Switch OLED:

The Nintendo Switch OLED sports the same technical specifications as the original Nintendo Switch, which was disappointing news for some. The console is starting to show its age in the graphics department after almost five years on sale, but that doesn’t mean Nintendo isn’t capable of producing some surprisingly great results. If you’re someone who doesn’t care about high framerates and resolutions, the Nintendo Switch OLED should at least make the Switch’s library of titles look better than before in handheld mode thanks to the crisp new display.

One advantage that the Steam Deck has over the Nintendo Switch OLED from the outset is that the majority of your Steam library will be playable on Valve’s new device. We say majority, because the truth is that not every PC title will be accessible. This is because the Steam Deck runs SteamOS, which is a Linux-based operating system. While Valve has promised to continue to improve compatibility with more titles running up to launch, there is a chance that some fan favorite like PUBG and Destiny won’t run on the Steam Deck.

At least not in its SteamOS form – it’s important to remember that the Steam Deck is an open platform, which means you can technically run whatever OS you like on it. It also has the ability to play games from other stores and launchers, which is pleasing to hear.

The Nintendo Switch is a more familiar proposition for console users. As a closed-garden, Nintendo dictates what titles are available on its hardware, and the fixed specs means that developers can benefit from knowing that every game they develop will run the same for every user. Games are arguably the Switch’s biggest strength, too, as Nintendo’s first-party lineup continues to have serious pulling power with gamers. Titles such as Breath of the Wild, Super Mario Odyssey, Super Smash Bros. Ultimate and Animal Crossing: New Horizons have helped make the Switch top the sales charts each month, and there’s plenty to look forward to in the years ahead.

So which portable is right for you? Well, that depends. The Steam Deck may have the Switch OLED beat on paper, but Nintendo has the evergreen appeal of its fantastic library of titles which you can’t play anywhere else. The Switch is also a console that has the benefit of allowing local multiplayer by detaching the Joy-Con, it has a proven track record since its launch of delivering a great experience.

However, the Steam Deck will instantly appeal to those who were craving a Switch-like device that’s capable of better performance. The fact it’s being created by Valve and adopts all the bells and whistles of Steam shouldn’t be underestimated, either. Time will tell whether it’s as ergonomic or as reliable as the Switch (Joy-Con drift aside), but it’s the first real competitor to Nintendo’s dominance over the handheld market since Sony’s ill-fated PlayStation Vita.

The best 2-in-1 laptop 2021: find the best convertible laptop for your needs

Predictions for open source and cloud over the months ahead

This top online learning platform had some serious security flaws