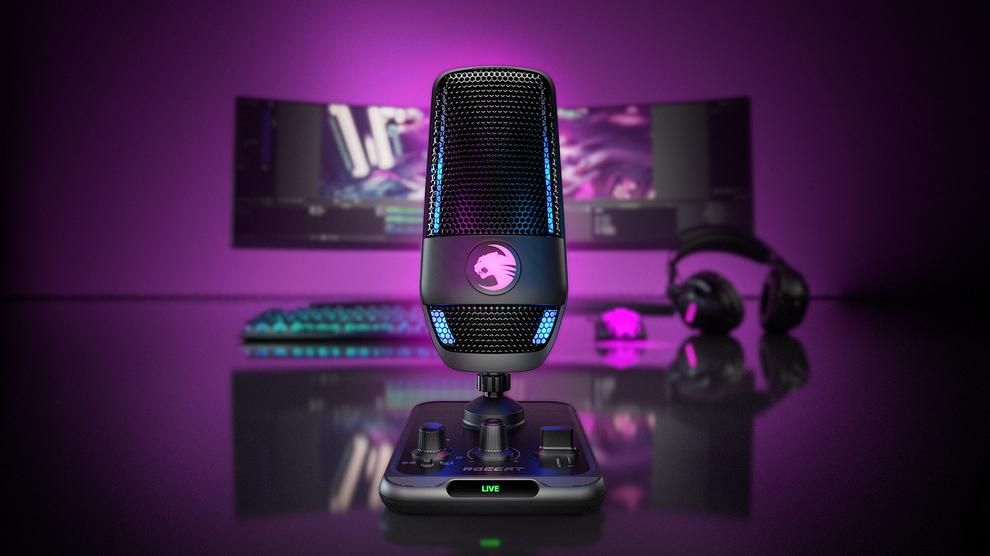 Roccat is launching what it describes as its first ‘studio-grade’ dual condenser USB microphone, complete with built-in controls. The Roccat Torch is now available for pre-order with the product officially going on sale on August 15 2021 for $99 / £89.99 / AU$149.95.

For anyone looking to jump into streaming online, there are typically a few big investments required before you get started, one of which being what audio recording hardware you’ll be using. Where USB microphones typically rely on software to make adjustments, and full XLR setups can be very pricey, the Roccat Torch aims to combine features of both into an optimized product made with content creators in mind.

The best of both worlds

The asking price is no small sum, but still more affordable than some of the most popular USB mics being used by streamers today, like the Blue Yeti X or the Elgato Wave 3. In fact, the asking price could be easily justified by the inclusion of the inbuilt mixer controls, something coveted by the streaming community and usually results in the jump from using beginner-friendly USB style microphones up to a more professional audio setup equipped with studio equipment.

Streamers and YouTubers have popularized products like the GoXLR from TC-Helicon because it provides flexibility to make adjustments to broadcasting audio mid-stream or performance. While a few cheaper USB microphones have a volume or gain dial built onto the device, it looks like the Roccat Torch controls will cover the basics to allow essential fine-tuning.

The control stand is also removable to allow the device to be used with traditional booms and stand mounts, and interestingly Roccat states on its site that “it can be reconfigured, allowing the mic module to sit on the arm, whilst maintaining the full functionality of the mixer-style base”, so you’re free to mount the Mic itself onto a stand while using the mixer separately.

Another feature we’re excited to see is the contactless muting, allowing you to just wave a hand over the top of the mic for an instant mute without having to tap or click any buttons, both of which can result in some pretty nasty feedback in the split second before the device goes quiet.

The Torch features a dual condenser design, 24-Bit audio with up to 48kHz sampling, and a built-in pop filter which should provide some fairly high-quality audio for content creators. To save on any additional leg work, the Torch is also plug-and-play so you don’t need to mess around with installing drivers or software if you’re in a hurry (though we would always recommend doing some tweaks in your streaming software (such as OBS or Stream Labs) before going live.

If that didn’t sell you then there’s also fully customizable RGB, because it’s a streaming mic and everything is better with some pretty lights. If the Torch is any good then it could easily solve some FOMO in the streaming community regarding upgrading to a more professional audio setup, something that requires a lot of cash and requires you to learn some additional skills if you have very little prior audio mixing experience.