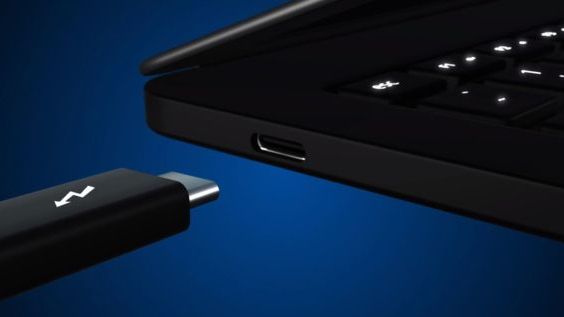 If you want to connect your laptop to multiple 4K displays, attach a graphics amplifier, transfer giant files to the fastest external drives or grab RAW video from an expensive camera, you’ll need a Thunderbolt 3 port.

With a maximum speed of 40Gbps, it’s the fastest port on the market today; even on par with the upgraded Thunderbolt 4 port. You’ll find some of the best laptops and 2-in-1 laptops with Thunderbolt 3 ports for good reason, along with PC peripherals and docking stations.

If high-speed connectivity matters to you, you’ll want your next system to support this powerful standard. While Thunderbolt 4 may be the future of connectivity, there are still plenty of reasons for Thunderbolt 3 ports to stick around.

Here are eight things you need to know about Thunderbolt 3.

1. 4x the speed of the fastest USB connection

It’s also double the bandwidth of Thunderbolt 2 (20 Gbps). With that kind of throughput, you can attach a graphics amplifier or eGPU like the Razer Core and turn your lightweight laptop into a bona-fide gaming rig. The system can contact the GPU at the same speed as if it were attached directly to the motherboard.

You can copy files to a speedy external SSD that’s faster than most internal drives. The same benefits apply when you’re recording directly from a professional-grade 4K video camera.

All Thunderbolt 3 ports are also USB Type-C 3.1 ports and use the Type-C’s thin, reversible connector. You can connect any USB Type-C device to any Thunderbolt bolt, because technically, Thunderbolt is an “alt mode” for USB.

3. Connects to two 4K monitors at once

You can connect from a Thunderbolt 3 port directly to a single monitor, using a Thunderbolt-to-DisplayPort cable. However, if you want to use multiple monitors over a single cable, you’ll need a Thunderbolt dock like many of the best docking stations available right now.

You can connect two PCs together using a single Thunderbolt 3 port and get a 10Gb Ethernet connection. That’s ten times faster than most wired Ethernet ports. So, if you need to quickly copy a giant file to your co-worker’s laptop, you’ll be able to do it at really high transfer rates.

How do you know if a port, wire or peripheral supports Thunderbolt 3, rather than plain USB 3.1? Look for a tiny lightning-bolt logo on the plugs of a wire or near the connector on a laptop or peripheral. Uncertified products are not allowed to use connectors with the logo.

Unfortunately, while Intel encourages companies to use these logos, they aren’t required. The Razer Blade Stealth is one example of a laptop that has a Thunderbolt 3 port with no label.

6. Enough power to charge most laptops

Because they use the USB Power Delivery standard, Thunderbolt 3 ports can send or receive up to 100 watts of power, which is more than enough to charge most laptops. Indeed, on some superthin laptops, like the HP EliteBook Folio G1 and the Razer Blade Stealth, the Thunderbolt 3 port is the only A/C port.

However, workstations and gaming laptops such as the Lenovo ThinkPad P70 or Asus G752 require a lot more than 100 watts. Thunderbolt 3 can also deliver up to 15 watts of electricity to bus-powered devices. So, external hard drives, cameras and portable monitors can consume a lot more juice.

7. External GPUs not guaranteed to work with every system

Though they use a standard Thunderbolt 3 connection, first-gen graphics amps or eGPUs aren’t made to work with every Thunderbolt-enabled PC.

The Razer Core, for example, is certified to work only with the company’s own laptops and with Intel’s Skull Canyon NUC mini PC. Asus only guarantees that its XG Station 2 will work with Asus laptops.

However, if a PC vendor hasn’t specifically blocked these amps, it is possible that they would work on an unsupported notebook. Hopefully, in the near future, we’ll see graphics amplifiers that are built from the ground up to work with any laptop that has a Thunderbolt 3 port.

8. Daisy Chain up to six devices

You can connect up to six different computers and accessories to each other using Thunderbolt 3 cables. Imagine connecting your laptop to a high-speed hard drive then sending another wire out to a monitor and a third wire from the monitor to a high-speed camera.

If all the devices in the middle of the chain have two ports (one for in and one for out), you can do it.

There’s a wide variety of sizes, features, and prices, which makes choosing the best laptop a challenge. For essential tips on how to go about buying one, check out our laptop buying guide.

Get over 20% off on these Razer Wireless gaming headphones.